I've been re-reading HARVEST HOME and its a really great creepy book. This and Tryon's THE OTHER were both made into great films but even tho I love both the book is better. Tryon is really interesting to me as well as he's a former film actor in a favorite fities film (and others films) I MARRIED A MONSTER FROM OUTER SPACE. An old girlfriend who wasn't much into these films would always be happy to watch this one and I can't say I blame her, he was a good looking guy. Anyway I prefer this to a lot of stuff from that period for "mainstream" horror fiction, it sucks me in every time. I generally prefer horror short fiction and with the Poe idea its all about mood which can't really sustain itself over a longer period as easily. 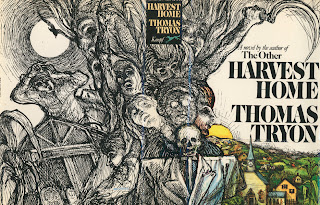