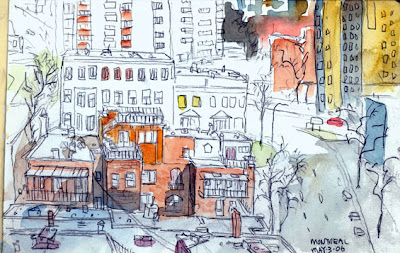 On Thursday, Alison and myself went on a little road trip to Montreal for a couple of days
to visit friends and check out the Disney exhibit there.
We hooked up with our friends and went out for mussels, frites and Quebec beer thursday.
Friday morning woke up, had breakfast and headed to the museum which was about 5 minutes from our hotel.
some sketches done from the hotel room. 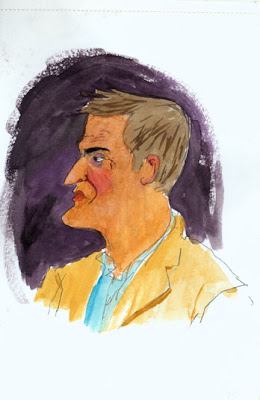 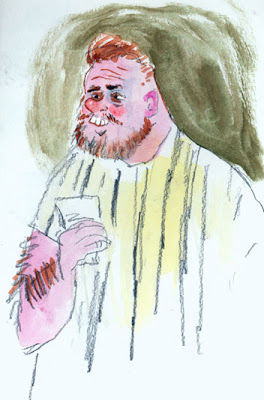 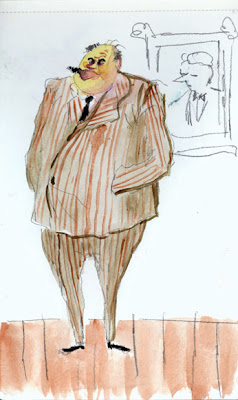 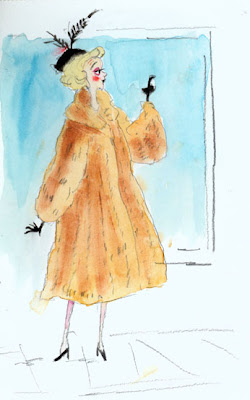 Walking in to the first room of the exhibit you hear the steam boat willie soundtrack, something I
haven't actually watched in awhile and forgot what it was. It was pretty cool to see a group
of kids on a school trip all sitting around the video having a hoot and laughing aloud, not jaded yet! Ub Iwerks storyboards for Plane Crazy and Gallopin Gaucho were on the wall. Yippee!!
Don't worry I'm not going to go through a room by room rundown, but what followed
was a fantastic show. Having never seen any Disney archive originals this was a
beautiful experience. The show concentrated on the first 40 years which is my favourite and
most interesting time for me. I recently read my first Walt bio [not counting the ones included in the art books) and really was amazed both by his achievment and the conflicting reactions
he inspired in people. From true artist and visionary to sentimental, empty entertainment peddlar. In many ways though its not my favourite movie , I remain Impressed by what he
tried to bring together with Fantasia, always financially precarious, trying to meld high brow culture with "pop" art and give the audience something it probably didn't want and getting
bad reviews from both ends. Its difficult to imagine someone doing that today, where everyone plays it safe
and clarity and making sure everyone knows whats going on at the expense of taking chances
is the norm. In a way that seems to be a cultural
thing of that generation to me. The idea of somehow exposing to, uplifting and challenging people with
"culture" that they might not have access to in other parts of the country. Something I see
in old illustrators from the turn of the century who felt it almost a mission to bring beautiful and new "art" to peoples homes in cheaper magazines around the country as well as modern american artists of the 30's and 40's.
But anyway, to say that I was knocked out by some of the stuff is putting it mildly. Seeing
all those beautiful Tennegren Pinnochio pans was incredible and looking at Edyvind Earle's
Sleeping Beauty paintings up close was majical. The man had hand as steady as a machine
and beautiful imagination to go with it.
Lots of nice samples or work that inspired the artists as well or images from the classic books
that would been referanced. Some great origninal Heninrich Kleys and Arthur Rackhams
and some nice surprises like two great paintings by Franz von Stuck and Maxfield Parrish's
Sleeping Beauty painting.
A couple of samples of the Beeautiful Blairs at the show that were
an unbelievable treat for me.

And a couple of my quick doodles of Mary Blairs studies for the Cinderellla movie. 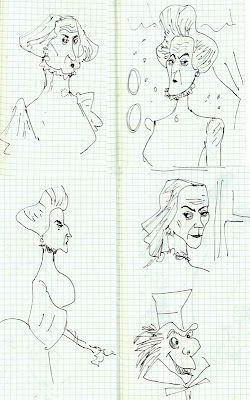 Probably my only quibble [ apart from I want to see more tho there
was plenty] was that there wasn't a Picasso , Stuart Davis or Matisse up in the Alice room
with all the incredible Mary Blairs. There was pretty fantastic, very realistic painting of dogs
with amazing expressions and more Victorian renditions of Alice but something more contemporary of the time in the art world would have fit nicely.
There was a nice number of David Halls watercoulors for his take on Alice that were gorgeous as well and way more vibrant
than the book I have of them. His Peter Pan sketches were fantastic too.
They were also screening the 2003 version of Destino, the unfinished Dali inspired/collaboration cartoon and they had nice Dali and John Hench storboards on the walls.
Lots of cool maquettes from the movies and they would screen Disney clips next to
german expressionist movies like Cabinet of Dr. Caligari and The Golem as well
Frankenstein and King Kong that highlighted referance points for scenes in the Disney films.
I could go on , there was an incredible huge model sheet of a Walrus, gorgeous Fantasia pans and Night on Bald Mountain concept art and lots of Snow White stuff but I gotta get back to work.

We left the next day and did a stopover in Picton in Prince Edward County , a small island
about an hour and half outside Toronto with some nice wineries, shops and restaurants.
Alison had been itching to try a restaurant there called Harvest and it was pretty darn yummy.
I managed to do some sketches at various winery stops and the town. 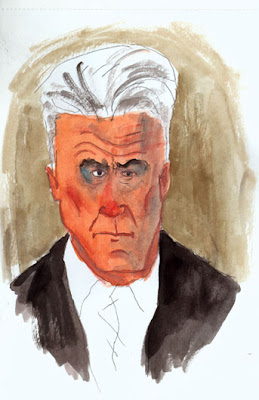 When I did the next 3 it was early in the morning, I had a shower, grabbed some coffee and went walking around Picton
and realized that even tho it was beautiful and sunny outside I was underdressed and freezing. But I stuck with it
trooper that I am, cursing myself for not wearing something warmer but not wanting to go back to the hotel.
Looking down on the Picton cemetary. 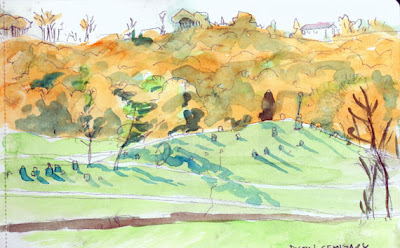 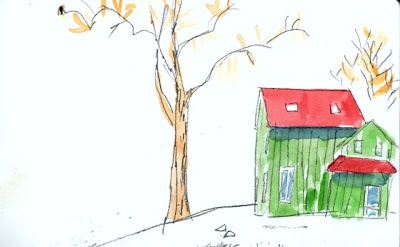 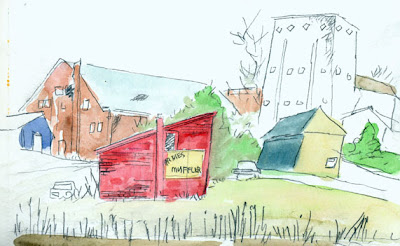 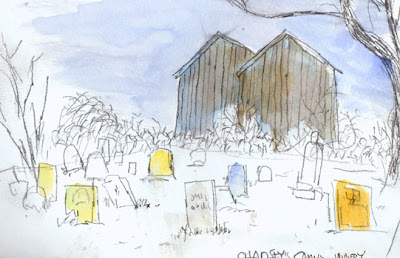 Yup, I managed to find a winery with a graveyard on the premesis. 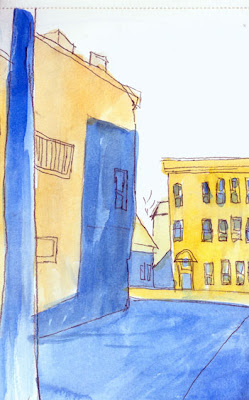 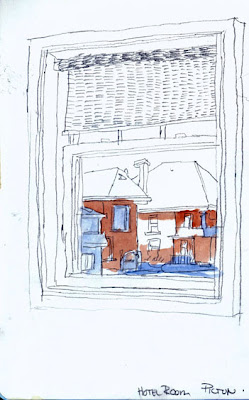 and this one was done in the car with the some 70's Andre Williams soul and the new Detroit
Cobras on the car stereo.