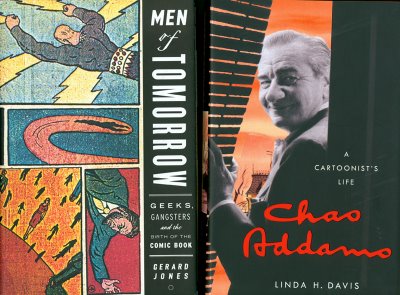 A couple of books I recommend that I've read over the last couple of month that give an insight into veeeery different
cartoonist lifestyles.
Men of Tomorrow charts the beginnings of the comic book industry in the 30's and forties including the earliar publishers organized crime ties and also the tragic story of Jerry Siegal and Joe Shuster, the creators of Superman, and their lifelong battle to
get a piece of the Superman action and make a living.
On the other end of the spectrum is the Charles Addams biography which was quite an eyeopener for me not knowing a lot
of the details of his life. This guy swung in high class circles and even dated Jackie O and a revolving door of New York socialites in between partying at
vacation houses in the Hamptons and car racing and of course creating some brilliant New Yorker cartoons.
Tho not uncommon, it still comes as a bit of a surprise to find out that some of Addams' famous gags were written by New Yorker gag writers. A must read for any Addams fan.
Two pretty different worlds of ink slinging.
Posted by Drazen at 9:31 AM

One i've spotted(but not read yet) is a Roz Chast book. She's this funny new yorker cartoonist aswell.
I've always loved her stuff.

yeah next time you are in town you'll have to come and
check out my sprawling estate!
not super familiar with Roz's work so can't say if its my
cup of tea or not