I really like these two books a lot. Especially NO MORE HEROES which is a real nice reference// biography/discography volume. I'm sometimes surprised by omissions tho. In NO MORE HEROES there is no entry for the Outsiders, a really great band that put out what is I believe the first UK punk band self released lp, Calling On Youth. Both that and second record a year later are great albums and not just obscure singles (both of which I only have vinyl reissues of sadly), What happened? Its more curious since the singer /songwriter of the band went on to form a great post punk band called The Sound mining territory between Joy Division and Echo and the Bunnymen uniquely with amazing songwriting and guitar playing by leader Adrian Borland. Critically acclaimed but not commercially which would be ok except The Sound are not even mentioned in RIP IT UP which I find pretty bizzare since they're better then a lot of the bands that get mentioned here.  I have a small connection with Borland in that my brother in law formed a band with him and worked with  him for about a year and half post Sound before breaking up so I've heard stories of how brilliant and difficult he could be to work with. 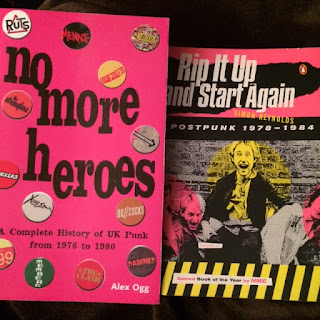 from the first Lp released '79