Hardback advance of children's book I illustrated coming out this spring arrived yesterday.

it received a starred review in Booklist which was nice.

*starred review* REVOLUTIONARY FRIENDS(Castrovilla/Kozjan/9781590788806) in Booklist (3/15 issue)  The full review is below:
"In 1777, the 19-year-old Marquis de Lafayette defied his king’s orders and left France to fight for freedom in America. Though initially expecting little, Washington found the young French nobleman idealistic, courageous, and eager to learn everything he could from the general he idolized. Congress had refused to give Lafayette a command, but he proved his mettle at the Battle of Brandywine, where he rallied retreating troops and suffered a leg wound. The doctor was told by Washington to treat him as he would his son, “for I love him with the same affection.” The picture-book story rather abruptly ends there, though the next three pages continue the vivid account of Washington and Lafayette’s “revolutionary friendship” in an information-packed narrative, followed by detailed timelines of their lives. In addition, there are suggestions of places to visit, a source bibliography, and a glossary translating French words and phrases sprinkled through the text. Short passages from Lafayette’s letters and other writings appear in small, scroll-like boxes on some double-page spreads. Kozjan’s illustrations, lively ink drawings digitally enhanced with color and subtle shading will engage readers as they bring the period settings to life. This oversize, handsome package will introduce a little known aspect of the Revolutionary War history through pithy words and often dramatic pictures It respects its audience as well as the historically significant
friendship it portrays." 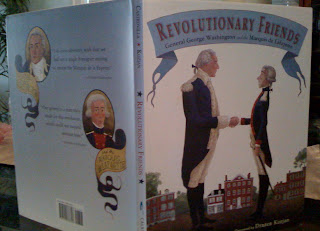 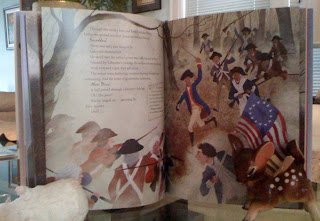