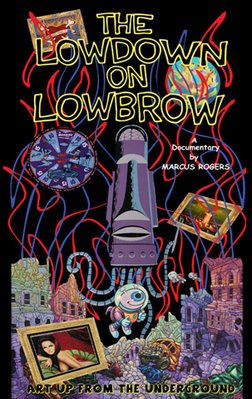 The "Lowdown On Lowbrow" is a 1-hour art documentary produced by Fountain Productions chronicling the evolution of the "lowbrow" genre and style including the relatively recent emergence of female artists at the
forefront of the movement.

The documentary is scheduled to air on BRAVO TV Canada on Sunday January 7 at 5pm.

a trailer is up onthe site.


Looks like Marcus Rogers did a fantastic job putting
this together from the trailer.

I was asked for a painting to appear in the documentary .
Looking forward to watching the doc to see if it makes the screen.
Posted by Drazen at 8:59 AM

crossin my fingers for ya buddy ;)

You deserve to be on there!

Oh man this looks interesting. Maybe the full show will appear on YOUTUBE? Congrats on being involved. HAPPY NEW YEAR !